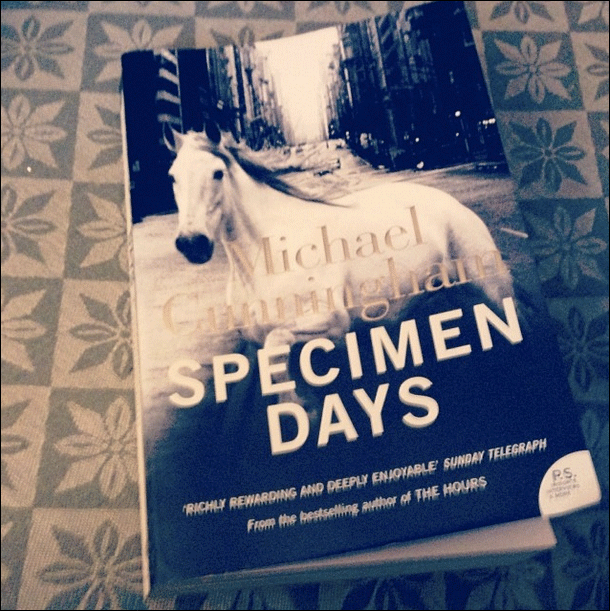 Title: Specimen Days
Author: Michael Cunningham, author of The Hours and By Nightfall
First Published: 2005
My Rating: 5 of 5 stars (average rating on Goodreads: 3:52)
I would recommend this book to: Anyone who liked The Hours, readers with an appetite for something extraordinary.
The Beginning: Walt said that the dead turned into grass, but there was no grass where they’d buried Simon.

This book is easy to love but difficult to describe. It was the first novel Michael Cunningham wrote after he won the Pulitzer Prize for The Hours in 1999. It has some similarities to The Hours in the way the story is told, though the subject and characters are very different.

1: A boy (Lucas) who spontaneously quotes Walt Whitman, his brother (Simon) who is killed by a machine at work, and his dead brother’s fiancé (Catherine), in 19th century New York.

2: New York some time after 9/11, a woman (Cat), who has a boyfriend (Simon). She meets a child (Lucas) who’s part of a weird terror gang that quotes Walt Whitman.

3: Some time in the future, a man/robot (Simon), programmed to quote Walt Whitman, forms a friendship with an otherworldly female (Catareen) and later they join forces with a child (Luke).

Still confused? Don’t let it scare you away from this amazing book. It’s not at all confusing to read. It’s more like a literary brain-orgasm. It’s one of those books where your reaction to turning the last page is that it would be fun to read it again right away, in order to tie up the loose ends. Because even though I got the big picture, there were so many details that I noticed too late. I would love to discuss this one in a book club or to have someone really clever explain the details to me. Not that it’s necessary in order to enjoy the book, just that it would be fun.

Specimen Days is brilliantly conducted, beautifully written and unique. I’ve never read anything like it and utterly enjoyed it.