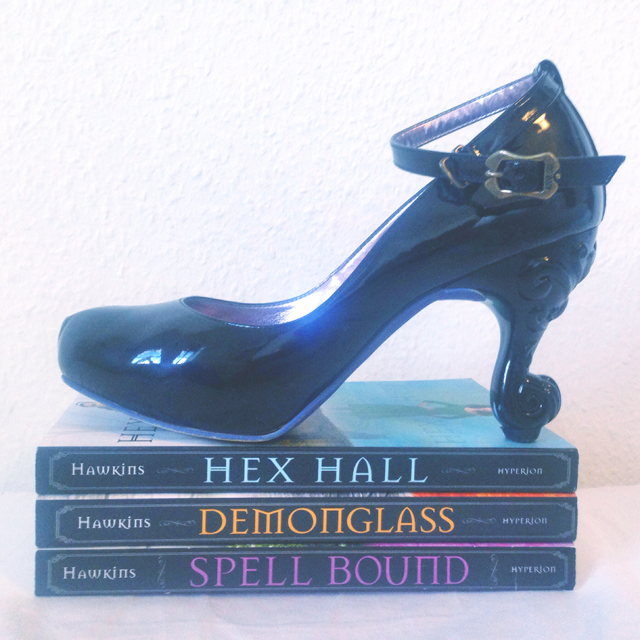 Hex Hall: 4 of 5 stars, Demonglass: 4 of 5 stars, Spell Bound: 2 of 5 stars
Author: Rachel Hawkins
I would recommend this book to: Anyone looking for a light and fun read
The Beginning: Felicia Miller was crying in the bathroom. Again.

Hex Hall started pretty good. The first book was a pleasant and fun little treat. I didn’t expect much from this book – just some easy entertainment on my kindle app. But I got so hooked that I ordered all three paperbacks.

This isn’t deep, sophisticated literature. It’s about a witch, Sophie, who is sent off to a boarding school for supernatural creatures. Her roommate is a vampire who everyone thinks is a psychopathic murderer, she falls in love with the hottest guy in school who dates the Queen Bitch, Elodie. And Elodie hates Sophie and will do anything to humiliate her and ruin her life. On top of that, Sophie is a somewhat crappy witch who can’t do proper magic like all the other kids. A classic teen story.

I’d been harboring this secret fantasy that he was only pretending to like her so that he could publicly dump her in the most embarrassing way possible, preferably on national television.

Hex Hall‘s strength is its humour. Sophie is deliciously sarcastic and not too self-important. I liked her. That being said, the novel has its flaws. There were things that didn’t really make sense. And things Sophie and the rest of the crew should have figured out … or at least considered. But it’s a fun, silly read, so I’ll forgive and forget.

The second book, Demonglass, did not disappoint: it was another fun and entertaining read. I had a good time with Sophie’s humour and smart-ass remarks, her confusion about who she is and who she can trust. It didn’t have the high school setting as we saw in Hex Hall, which disappointed me at first (I’m a sucker for high school stories). But the story line made up for it. And the love story takes a Romeo & Juliet twist – with a love triangle thrown in the mix (in case you wondered, I’m totally team Archer – he’s so hot!).

The third and last book, Spell Bound, did, however, disappoint me. The last book in a series is always difficult for me. I’m not much into ‘final battles’ and whatnot. I’m more into characters, dialogue, relationships etc. And it seemed some of the magic was gone from this one. It just wasn’t that interesting or amusing. There was something missing … I guess the story line wasn’t strong enough to keep things exciting at the end. But I still had a few good laughs.

Right now, I’m so happy to see you that I wouldn’t care if you’re secretly a ninja sent from the future to destroy kittens and rainbows.