He was like a song I’d heard once in fragments but had been singing in my head ever since. 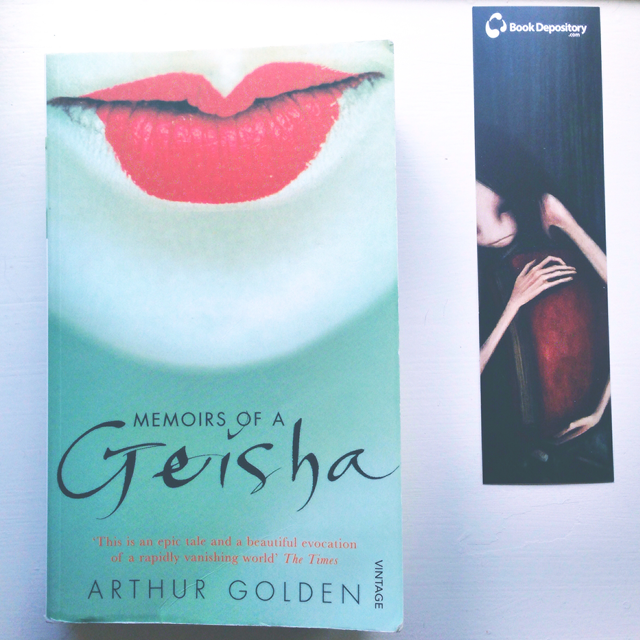 Title: Memoirs of a Geisha
Author: Arthur Golden
First Published: 1997
My Rating: 4 of 5 stars (average rating on Goodreads: 4.05)
I would recommend this book to: Anyone looking for a good story

The Beginning: Suppose that you and I were sitting in a quiet room overlooking a garden, chatting and sipping at our cups of green tea while we talked about something that had happened a long while ago, and I said to you, ‘That afternoon when I met so-and-so … was the very best afternoon of my life, and also the very worst afternoon.’

A poor girl with beautiful eyes is sold to become a servant and later a geisha. With her, we’re swept into the mysterious world of the geisha: a world where women make careers of entertaining men, where serving tea is an art form, a world full of rules of how to act, dress and do your hair and make up.

This is one of those stories you can disappear into. It was such an enjoyable read. The plot was very captivating: We had a love story, rivalry between women, enemies set out to destroy you, friends with hidden agendas, and in the midst of it all an ambitious protagonist with a clear goal: to become a successful geisha. Nothing can go seriously wrong with a setting like that.

The writing was beautiful, but had its flaws. Sometimes it was hard to tell whether it was a novel or a textbook I held between my hands. There were pages where our heroine stepped out of the story and explained in detail how certain things worked in this strange world. Yes, this knowledge was vital in order to understand the story, but simply throwing in a few pages to explain things isn’t good enough. A brilliant writer would have found some way to explain these things to the reader through the story.

I loved the plot, but there was one thing that annoyed me: the ending. — SPOILER ALERT — Things seemed to suddenly work out too perfectly, which I hadn’t expected. I had imagined a Japanese Gone With the Wind-like story. I thought that would have been pretty neat, and was quite sure that was the way the story would go. And then we get a Disney ending instead. A Disney ending where Beauty disses the Beast/Rhett Butler and marries Prince Charming/Ashley instead.

6 thoughts on “Memoirs of a Geisha”