Skip to content
The more I see of people the more I am convinced that they are never good or bad – merely comic, or pathetic. 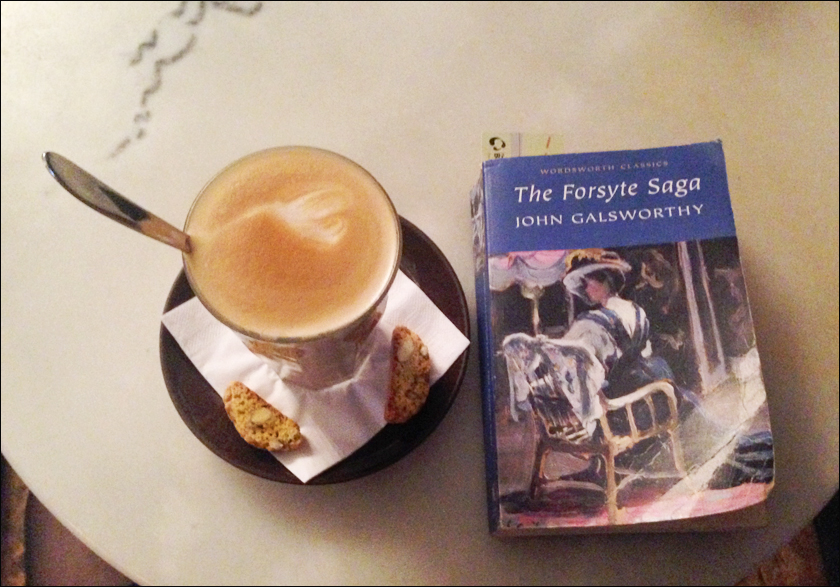 Title: The Forsyte Saga
Author: John Galsworthy (winner of the Nobel Prize for Literature in 1932)
First Published: 1922
My Rating: 4 of 5 stars (average rating on Goodreads: 4.14)
I would recommend this book to: Anyone who likes big books (and cannot lie)
The Beginning: Those privileged to be present at a family festival of the Forsytes have seen that charming and instructive sight – an upper middle-class family in full plumage.

The Forsyte Saga was an amazing journey. At first I found it a bit confusing because of the many characters, and there were parts I found a bit dull. But somewhere during the first part, it really got interesting. What happens in this first part sets the tone and defines the rest of the novel, as the decisions and mistakes of the first Forsyte generation determine the lives of the next generation. Moreover, we get to see characters who make the same mistakes again and again; characters who never get any wiser.

He might wish and wish and never get it – the beauty and the loving in the world!

The one thing that defines the plot in The Forsyte Saga is the unhappy marriage between Soames and Irene Forsyte. She, an extremely beautiful woman, cannot love him, while he, a man of property, sees her as his property. Irene develops throughout the novel; she both learns and pays from her mistakes. Soames never seems to learn anything.

Then again, one almost (almost!!!) can’t help feeling a tiny bit sorry for Soames. He’s just such an idiot! It’s seems he has never learned what love is and how to connect with another human being. He is perhaps one of the most pathetic characters I’ve ever encountered on a page. I would pity him if it wasn’t for his cruelty and abuse.

The unhappy marriage splits the family in two and the next generations suffer from the family feud. It’s almost like Romeo and Juliet – but with a huge twist.

All in all, the novel was a delicious treat!

4 thoughts on “The Forsyte Saga”