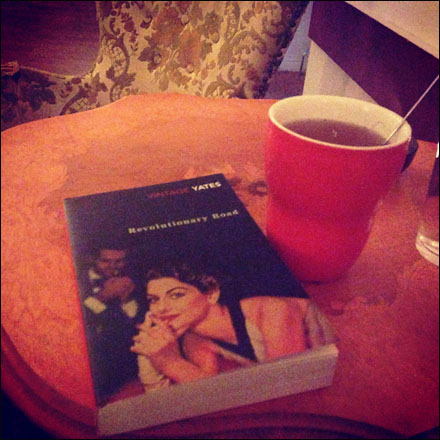 Are artists and writers the only people entitled to lives of their own?

I would recommend this book to: Anyone interested in reading about the downside of American suburban life in the 50s.

The Beginning: The final dying sounds of their dress rehearsal left the Laurel Players with nothing to do but stand there, silent and helpless, blinking out over the footlights of an empty auditorium.

Revolutionary Road tells the story of April and Frank Wheeler, a couple bored by playing house. They want more out of life – especially April, since she’s the one staying at home taking care of the kids and the house every day. So they make a deal and start planning: they don’t want this life anymore, they want something extraordinary. April is determined, but Frank gets second thoughts.

I think it’s unrealistic for a man with a fine mind to go on working like a dog year after year at a job he can’t stand, coming home to a house he can’t stand in a place he can’t stand either, to a wife who’s equally unable to stand the same things.

The theme of this story is very dear to me. I did my master thesis on marriage from the wife’s perspective in literature back in 2007, and still find the subject very interesting. Revolutionary Road was an interesting read. But it ends about there. Here’s my problem: a huge part of the book was crammed with descriptions of how tedious the Wheeler’s lives are. And guess what? That’s tedious to read about! It just went on and on with descriptions of Frank’s boring job – which he makes even more boring by not giving a shit about anything.

This book is 338 pages, and it took me about three weeks to finish it. Every time I opened the book, I was so bored I could scream with desperation. So why did I keep reading? I found the theme interesting and I must admit that I enjoyed the conversations between Frank and April. Still, I can’t give this book more than two stars. I think it should have been a novella or a short story instead of a novel. There were so many things that could easily have been left out.